St. Andrieshofje at the Egelantiersgracht 105-141 is one of the oldest surviving courtyard of Amsterdam. Only Begijnhof, inner court of the Beguine, is older. The courtyard was founded in 1614 and built in 1617. The almshouse name is painted above the entrance. A bright blue tiled hallway leads to the courtyard, overlooking a pretty little 18th century water pump. Originally there were 36 little houses with 66 residents; now one person in each little house. Above the eastern dwellings housed a chapel, inaugurated in 1623 but radically changed in the 19th century. The facade has an early 17th-century gable stone with Christ and the words Peace sy with you. 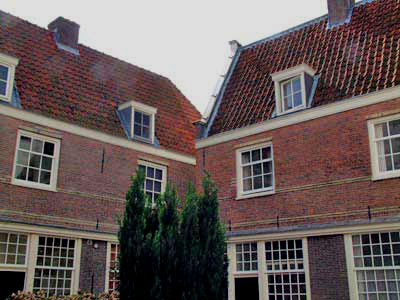 In 1614 had the rich unmarried farmer Ivo Gerritsz the will stipulates that his estate had to be given to a court, for "alsulcke eerlicke poor persoonen". Ivo's cousin Jan Jansz Oly (the father of the famous priest Jacob Oly) donated the necessary land, on which in 1617 the St. Andrieshofje arose. The courtyard was named after the name of the house of Jan Oly (Sint Andries, Nieuwendijk 213). When Jan Oly died in 1615, his widow moved to the Pinas (Singel 290), where they again put in the sign of St. Andrew. St. Andrieshofje was destined for needy Catholic widows. 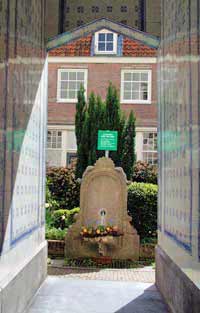